Leaving Puerto Vallarta we embarked on the next leg of our adventure into uncharted territory. The first stop along our three and a half week tour of Mexico’s gorgeous Pacific coastline was Playa Mayto, a remote, empty, long stretch of undeveloped beach two hours south of Puerto Vallarta. 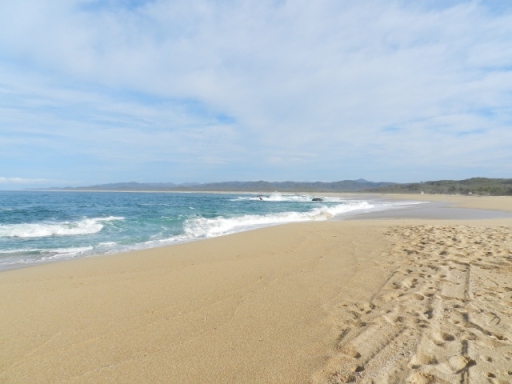 We camped on the beach in front of Hotel Rinconcito, one of the only two little hotels around and spent the evening swimming in the ocean and walking as far down the empty stretch of beach as we could.

The next morning we learned that Playa Mayto is a popular place for sport fishing in the summer. Fernando, the owner of Hotel Rinconcito, showed us pictures of huge Roosterfish, Dorado, and Huachinango (red snapper) that had been caught right off the beach and the hotel had huge bbq grills for fresh fish fiestas. 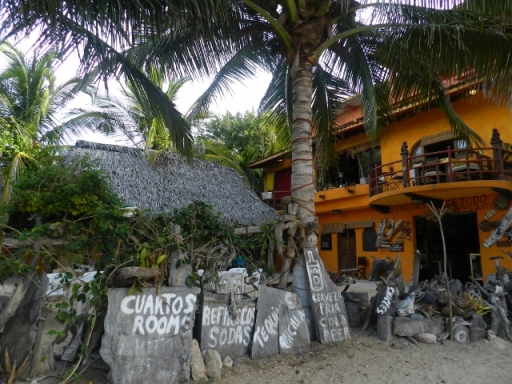 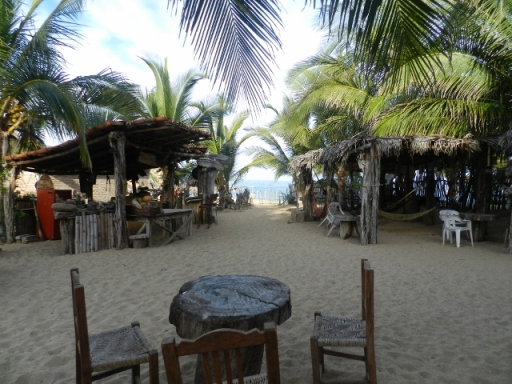 Later that morning we made our way down to Bahia de Navidad, a beautiful bay with the little fishing village of Melaque at the north end and the town of Barra de Navidad on the south end. There is a surf break at Barra de Navidad but there were no waves at the time so we camped at a nice campground on the beach in Melaque where we made friends with some elderly Canadians traveling in RVs. Heaps of Canadians come down to Mexico for a few months this time of year to escape the freezing Canadian winters- out of all the people we have met so far an overwhelming majority are Canadians. Pretty interesting, eh.

The next morning we drove an hour south to Pasquales, a famous surf spot known for it’s big, fast, heavy barrels. We found a spot to camp at Hotel Rio de Pasquales which ended up being the surf nexus of town. It was Friday night and tons of surfers were visiting for the weekend, primarily Mexicans from Guadalajara a few hours away. The sand on the wide stretch of beach was dark grey and hot and was sadly littered with all kinds of trash. Out of all the beaches we visited on the coast, Pasquales definitely had the most trash, possibly because so many people flood in and out of the town during the surf season. Aron surfed some fun fast tubes in the morning and then we continued on our way. 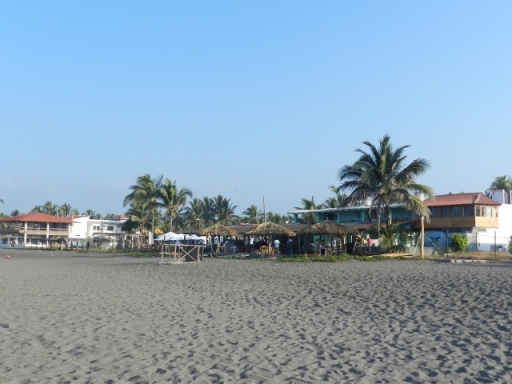 After the morning surf at Pasquales we drove south to La Ticla, a really fun left and right point break over a river rock bottom. We spent two nights at a large campground on the beach which consisted of a long row of palapa shaded sandy camping spots. Aron surfed some really fun waves and we enjoyed all the culinary delights that the local women would come to the campground to sell- tamales, pescadillos (fried fish tacos), and freshly baked breads. 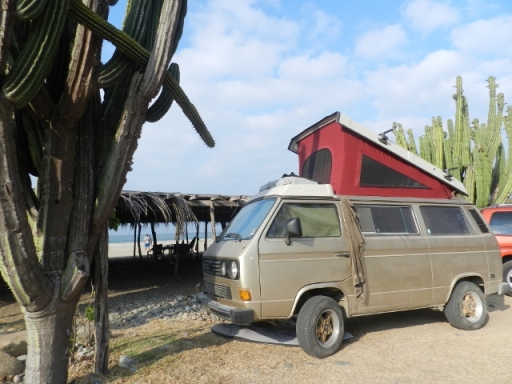 Next up was Rio Nexpa, a beautiful little beach town alongside a river with a firing left surf break. The beach was lined with cute little cabanas with palapa roofs. From any spot along the beach there is an amazing view of the waves peeling down the point. We camped at Mary Jane’s, a very chill spot consisting of a nice upstairs restaurant with a gorgeous view of the waves and a little sandy campground with bathrooms, showers, and a spot for washing dishes. The owner, Martin, originally a chef from Florida, is absolutely awesome and made us feel right at home. We made some new Canadian and Israeli friends that we shared some nice dinners with and we also met a lovely couple of Australians, Bryon and Stevi, who are traveling the coast in a Ford Econoline camper van. Aron surfed good sized perfect waves three times a day while I did yoga in the mornings, ran in the evenings, and read and watched the surfers on the waves during the heat of the day. 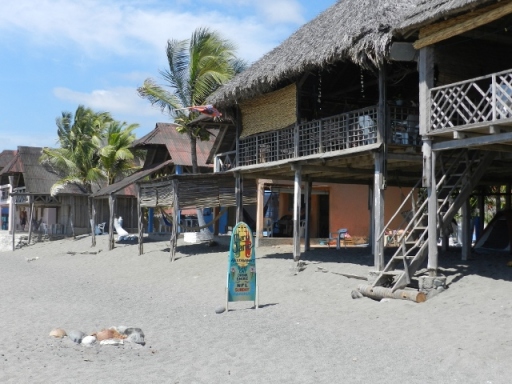 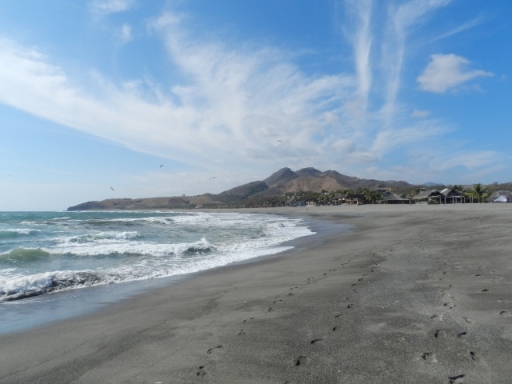 After four nights in Nexpa we decided it was time to move on although we would have loved to stay for a month. We drove two hours south to Playa Saladita, a tranquil little beach town with a slow wave that was perfect for learning on. We set up camp in the sand on the beach under a shaded palapa at Paco’s restaurant and liked it so much that we stayed six nights.

Aron took me out surfing every day and I got to work on my nonexistent skills a bit. Some days I would do yoga in the morning, surf in the afternoon, and then run on the beach in the evening- now that’s what I call a perfect day! Our Aussie friends were in Saladita too and we explored a few other surf breaks in the area with them. Twenty minutes south of Saladita just north of the town of Troncones is a little town called Majahua with a fun beach break called La Boca (meaning “the mouth” since it is at the mouth of a river). We drove across the sand out to the break where Aron and Byron surfed some fun waves. 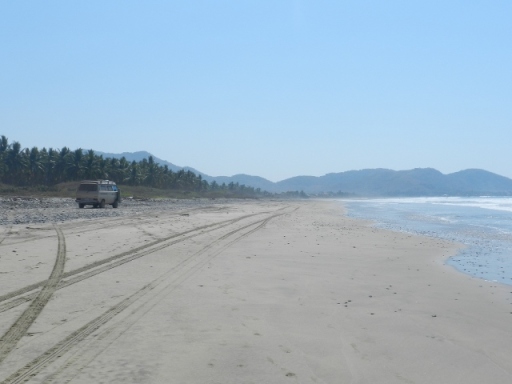 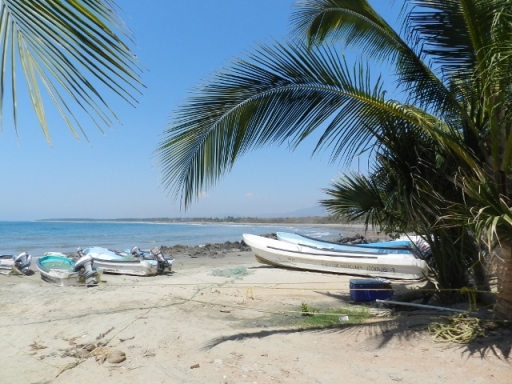 We also ventured thirty minutes north of Saladita to a spot called El Rancho, a remote left point that runs for at least a hundred yards and has barely been discovered. The only thing on the beach besides sand and surf is a little restaurant. Aron, Byron, and our Canadian friend Alex surfed some empty, fun waves there as well. 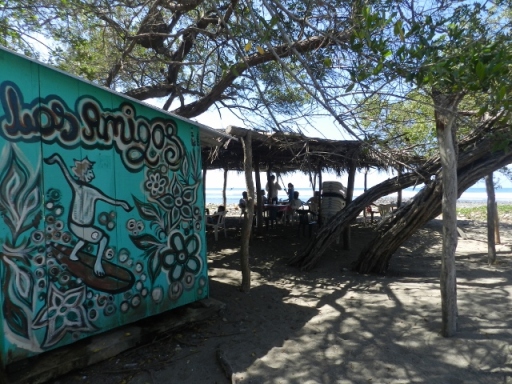 After nearly three weeks of being salt crusted and sand blasted, we decided to splurge on a hotel room in Zihuatanejo, a pretty large, developed coastal resort town. We arrived in the city in the evening and didn’t have much of a plan except to drive around and find an inexpensive hotel for the night, which we’ve since learned is not the best idea. We quickly became overwhelmed trying to navigate the maze of streets in the crowded, unknown city, especially after spending so much time in little beach towns with hardly a single dusty road running through them. Hot, sweaty, tired, and frustrated, we parked the van while I tried to find a hotel in our Lonely Planet travel guide. After a few moments, a police truck drove by, turned around, and pulled up alongside of us. We were worried until we saw the huge smiles on their faces. The four policemen ended up being super friendly and just wanted to make sure that everything was ok. They even recommended a cheap hotel in the center of the city and offered to provide us with a police escort. We thanked them but decided to drive back along the coast to try our luck at some of the beachfront action. We parked the van near Playa Madera, one of the main beaches and strolled around. As we walked along the cobblestone streets a bottle of water came sliding down at us from the steep hill above. We caught it and walked up the hill to return it to its owner who we chatted with about places to stay for the night. He ended up offering his place to us which turned out to be a gorgeous $800 a night four story villa overlooking the bay that he takes care of. There was a group of Americans arriving the next day to rent out the villa, but he gave us the top floor for the night which had the pool, a kitchen, a library, a beautiful tile bathroom with hot showers, and an amazing view of the bay for 200 pesos (about $15). 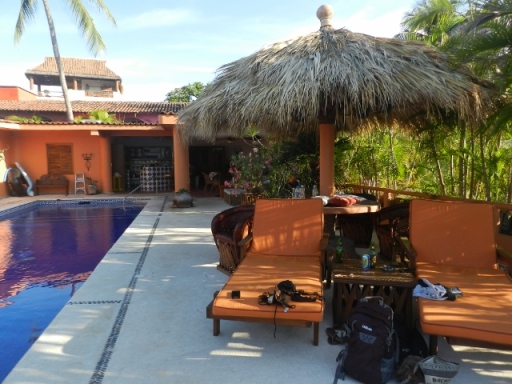 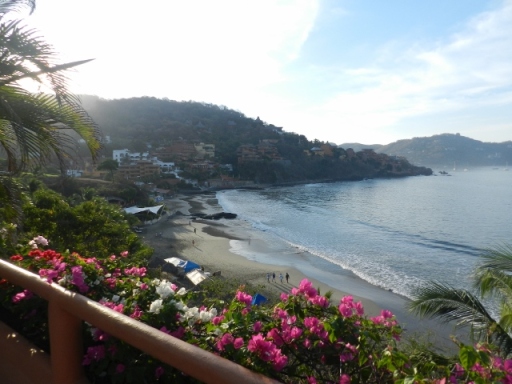 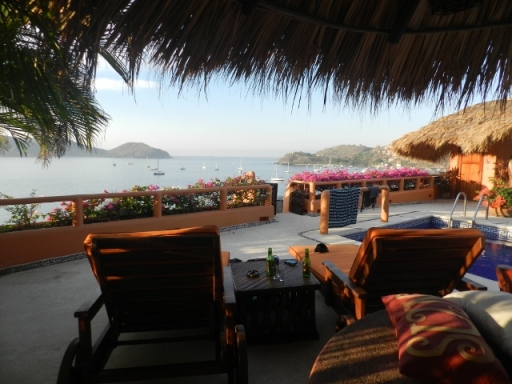 We had forgotten what a hot shower feels like after three weeks of cold showers. After cleaning up, Aron and I walked along the malecon to have dinner at a restaurant that our new friend recommended. We had a lovely romantic dinner of chile rellenos (stuffed chilies), mahi mahi, and margaritas and then walked back to the villa where we joined our host for a little tequila as we enjoyed the gorgeous open air view of the city. What started out as a hot, sweaty, frustrating encounter with the city ended up in a wonderful, memorable night in Zihuatanejo.

We spent our second night in the city down the street from the villa at Bungalows La Madera, a gorgeous, inexpensive hotel that I would recommend to anyone visiting Zihuatanejo. 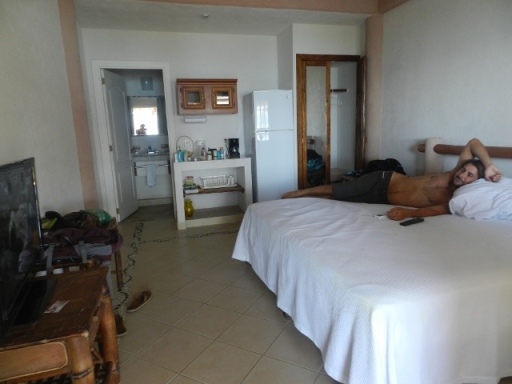 That evening we met up with Byron and Stevi for a delicious Italian dinner in the center of town. We had pizza for the first time in months and it was wonderful.

The next stop on the surf agenda was Lagunas de Chacahua, a national park that we had heard about from other travelers. We caravanned down the coast with Byron and Stevi and arrived after a thirty kilometer drive on a super wash board dirt road that rattled the van like a maraca. I have never seen anything like Chacahua- the network of lagoons separated the beach where we were camped from an island with a long perfect right point off a jetty. There were egrets, herons, and other birds everywhere and the lagoon waters were clear and calm and perfect for swimming. 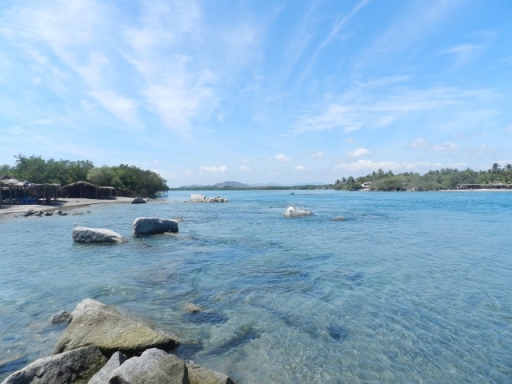 A large portion of the population in Chacahua is Afromestizo- of mixed African-Mexican descent. We read that a slave ship may have sunk nearby long ago which is how the community started. We camped in a grassy area alongside a little restaurant run by a friendly, elderly local woman who cooked 50 peso fish plates for us. 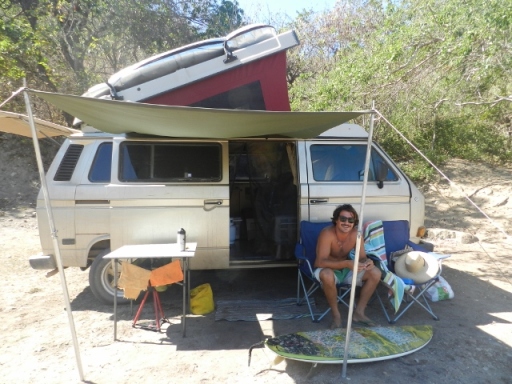 We would paddle across the lagoon or pay 10 pesos to have a lancha (little boat) take us across to the island where Aron and Byron had fun surfing. 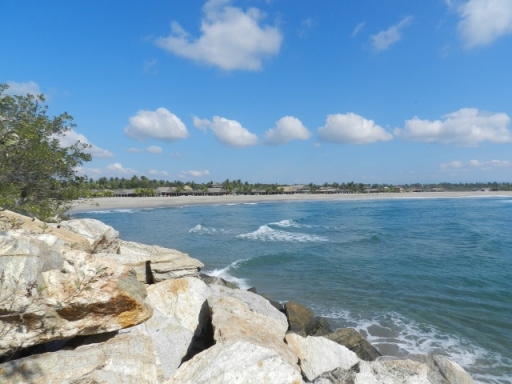 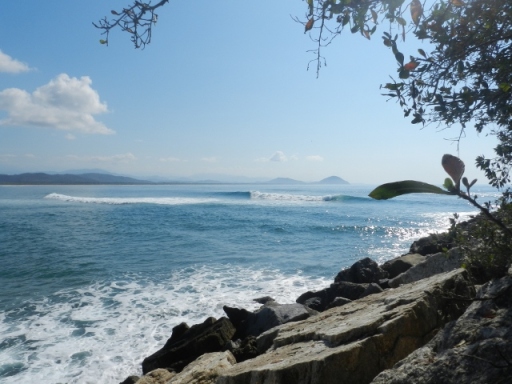 There was another wave on our side of the beach as well that barreled pretty hard and was even more fun although not as long.

After two beautiful clear days and nights at Chacahua, the mosquitos that we had heard so much about came out and attacked with a vengeance. As soon as the sun would start to set we had to hide in the van for the rest of the evening where we would watch movies and read. When the swell dropped and we got tired of the mosquitos, we headed south for Puerto Escondido, a spot known as the “Mexican Pipeline” for it’s huge barrels. There wasn’t much for waves while we were there so we just spent one night camping next to a nice little garden restaurant on the beach before making the long trip through the mountains to Oaxaca.

This last month of traveling has been pure bliss. We have seen so many new places and have met wonderful people all while hanging out, surfing, and eating amazing fresh seafood at some of the most beautiful beaches in the world. We are just living and loving life!