After saying goodbye to our pals Benny and Crystal, we headed back into the Sacred Valley to do some strenuous hiking with Johnny and Patty. On the way to the town of Ollantaytambo where we would start our three day hike, we stopped to see Salinas de Maras, a vast kaleidoscope of salt pools.

The folks that have been harvesting salt here since Pre-Incan times carved a series of earthen pools into the side of the mountain to catch the salt from a warm, saline underground stream that flows down the valley. As the water evaporates from the ponds, salt crystals deposit at the bottom and on the sides of the pools and is then scraped off and dried. There are over 3,000 individual pools here!

Our next stop was Moray, a set of Inca agricultural ruins that form a magnificent set of concentric terraced circles. Apparently, the temperature from the top level to the bottom most circle can differ by more than 25 degrees Fahrenheit, leading to the belief that these terraces were possibly used to experiment with growing various crops, like an agricultural laboratory.

In the evening we arrived in the beautiful little town of Ollantaytambo, nestled in a valley below the remains of an Inca fortress. After a good nights sleep in the van, we set off for the three day hike through the Sacred Valley. We walked along train tracks paralleling a river before climbing up into the hills and passing through isolated villages full of mud houses and friendly villagers. Before long we zig zagged steeply up and out of the valley past farms of corn and potatoes until we reached some ruins atop a waterfall where we would spend the first night. The view of the valley below from the ruins was spectacular and the sky graced us with a rainbow during the hardest part of the climb. We set up our tents inside the walls of the crumbling ruins that sheltered us from the wind while we slept peacefully. 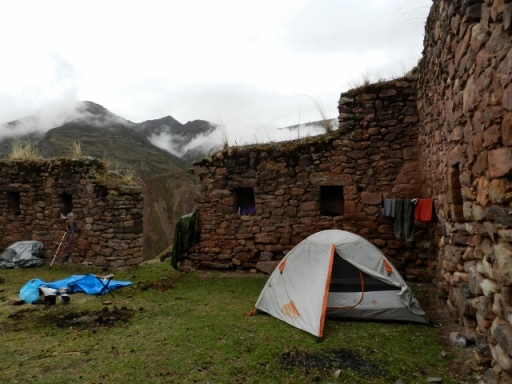 Sharing a bedroom with Inca spirits!

View of the ruins and our campsite from above

Awaking with the sun in the morning, we set off after coffee and oatmeal for the most difficult day of the hike. We continued to climb up, and up, past herds of sheep tended by little old ladies until the scenery changed to golden high altitude grasslands. 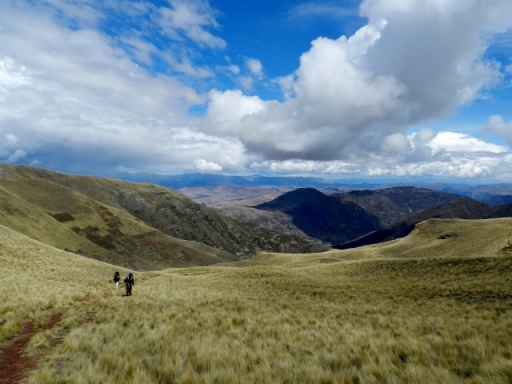 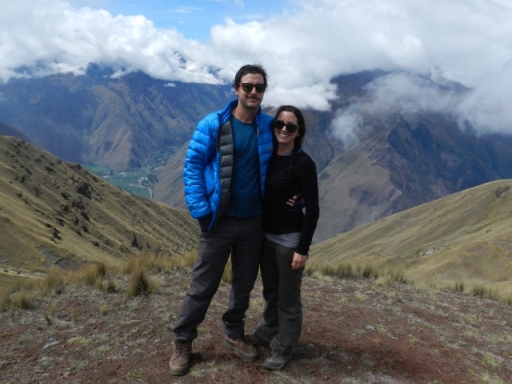 The Sacred Valley below

We stopped to make some lunch on a steep, narrow part of the trail with beautiful views of the valley far below. While we sat there eating egg salad sandwiches, a condor appeared out of the clouds below us, and slowly flew right over us, just cruising by to check us out. He was so close that we could see the detail of the white collar around his neck, his finger-like wingtip feathers, and could appreciate his magnificent size. It was magical! Andean condors can reach wingspans of more than three meters in length and are pretty rare. I was too captivated to even think about scrambling for my camera but here is what they look like: 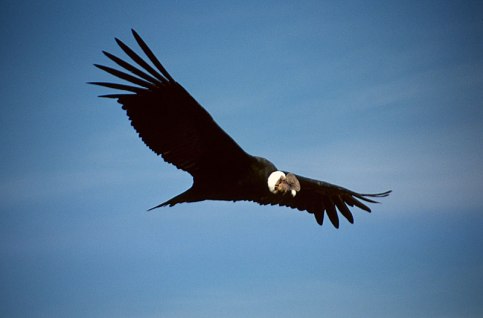 Shortly after the magical condor moment we started to descend into another valley. As we carefully walked down the steep, rocky path the clouds parted to reveal gorgeous views of the surrounding snow capped mountains. 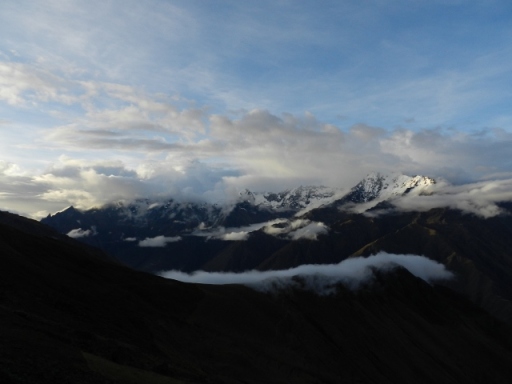 As the sun set, we still hadn’t reached the second camp site so we continued on with headlamps and managed to find our way down through the dark. After eight hours of hiking, we made it to camp just as it started to rain. Success! Luckily our tents kept us pretty dry and the next morning was just a little three hour walk back to Ollantaytambo.

Back in town, we were greeted with Ollantaytambo’s annual festival full of music, dancing, food, drinks, and brilliant colors. We gathered in the central square along with everyone who journeyed from all the small towns in the surrounding area to join the festivities. Each village had its own local costume and traditional dance to the sound of live Andean flute music. 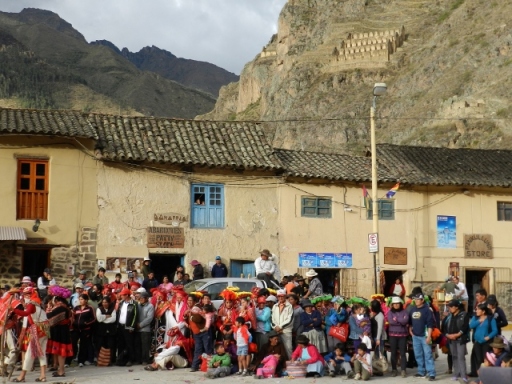 Watching the festivities in Ollantaytambo below ancient Inca ruins

Some dances represented the planting and harvesting of the ever important potato, while one of our favorites was the dance of the condor, an animal sacred in the Andes. In Inca mythology, the three levels of existence are represented by the condor (the heavens or upper world inhabited by superior gods), the puma (the earthly world), and the serpent (the underworld and spirits of the ancestors). 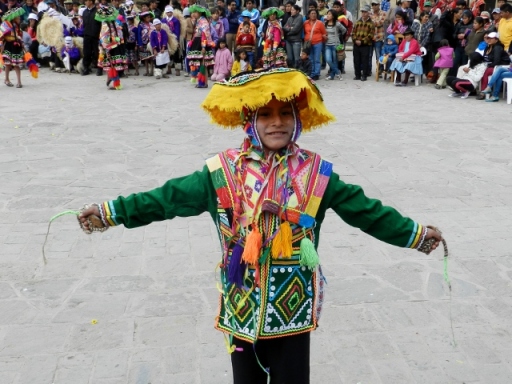 This beautiful preservation and continuation of ancient Peruvian culture was moving to witness and we felt so lucky to see it all come alive. The colors, the music, the dancing, the smiles, all opened our hearts to a part of Peru we hadn’t yet experienced and will always remember.