The Carretera Austral is a mostly dirt and gravel highway that traverses 800 miles through Chilean Patagonia. The road is rough, windy, and dusty but the scenery it winds through is unparalleled. Never in our lives have we seen wilderness as majestic as this. Our friends from Oregon described it as the American North-West on steroids. Crystal clear rivers, lakes bluer than imaginable, pine and beech covered mountains, and craggy, snow covered peaks were a part of our everyday scenery.

Making our way into Southern Chile’s lakes district, we stopped at Parque Nacional Conguillo, famous for the giant cone of Volcan Llaima towering over a forest of monkey puzzle trees out of a Dr. Seuss book. We camped alongside a beautiful glacial lake surrounded by snowy mountains and hiked up a ridge where we enjoyed magnificent views of the park.

Wild camping at its finest 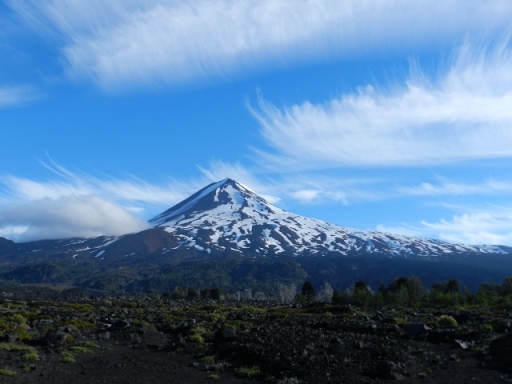 View of the park from the Sierra Nevada trail

Chile’s lakes district has a huge German influence. Back in the 1800’s the Chilean government opened the remote south to Germany for settlement, providing land in exchange for the development of agriculture and forestry in the region with European technology. For an example of how prevalent the German influence is, all of Chile and Argentina use the German word for cake- “kuchen” (pronounce koo-hen). We stopped for some coffee and kuchen in the lovely lakeside German town of Frutillar, then continued around the lake to Puerto Varas to stock up on food and send out Christmas cards before heading into the wilderness of the carretera austral. 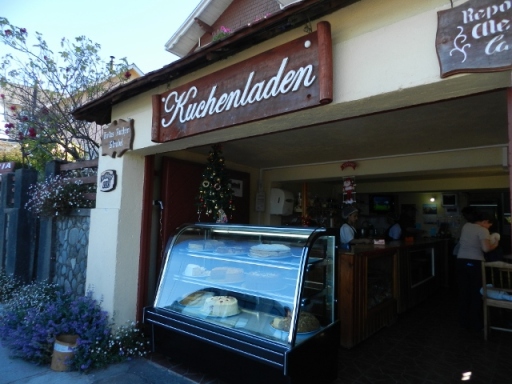 Apple strudel- a taste of Germany in Chile

There’s always time to stop and smell the roses

Beautiful old architecture on the road between Frutillar and Puerto Varas

Our first stop on the carretera was Cochamo Valley, known as the Yosemite of South America. The sides of the river valley are covered in virgin temporate rainforest and old Alerce trees encompassed by giant walls of granite drawing climbers from around the world. We backpacked into the valley and spent three days fishing, swimming in the frigid river, and hiking up the steepest trails we have ever encountered. So steep in fact that one hike involved steel cables and climbing ropes to get up sections of slippery granite rocks.

The pretty town of Cochamo 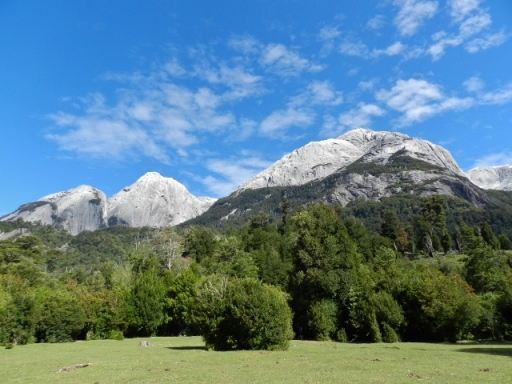 The granite domes of Cochamo

A very steep climb- going down was almost scarier! 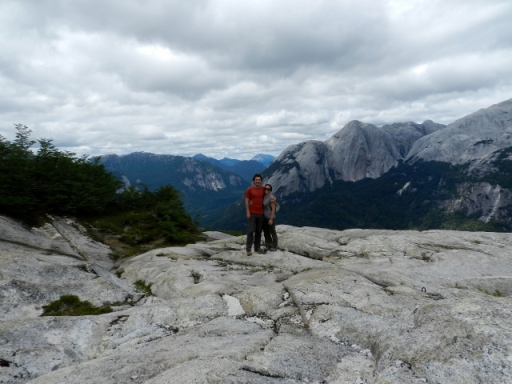 At the top of the valley

From Cochamo we drove the dusty road to its temporary end in Hornopiren where we loaded the van on a ferry to cross the fjord to where the road begins again. The carretera is broken up by a road-less section of Parque Pumalin, one of the largest private parks in the world created by Doug Tompkins of The North Face. Tompkins started buying tracts of land in Patagonia in the 1990’s in order to protect it from exploitation and turned it into a giant conservation project, the result of which is beautiful Parque Pumalin.

Parque Pumalin encompasses an area of temperate rainforest, like a jungle but in the cold south. Ferns, bamboo, and giant leaves of rhubarb perforate the forest floor between the trees. We had luck with the weather and camped on the way to Volcan Chaiten at one of the most scenic campgrounds we have ever been to. The volcano erupted just a few years ago in 2009, spewing hot ash for miles around. The barren landscape of dead trees and the slowly recovering town of Chaiten remain evidence of the destruction. 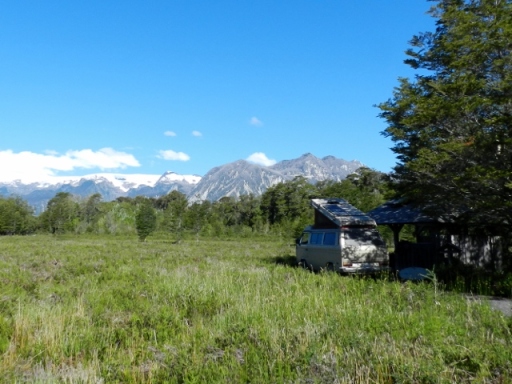 Christmas brought rain but luckily we were at a campground with a nice shelter and we celebrated with wine, homemade pizza, and the last episode of Game of Thrones season three. It was a lovely Patagonian Christmas but after two Christmases away from home we are looking forward to spending the holidays with family again! 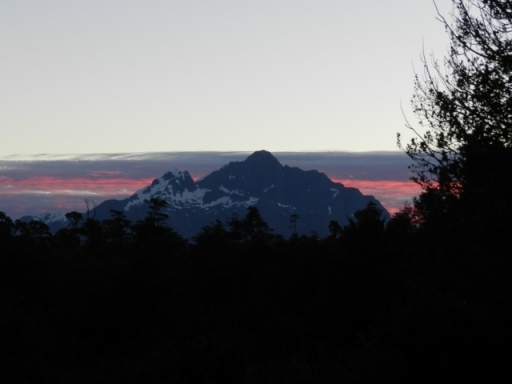 The weather cleared as we arrived in Futaleufu, a cute little town on the Futaleufu river, one of the top three whitewater destinations in the world. It is the bluest, most raging river we have ever seen and somehow we ended up rafting it… The class five rapids were a little intense for us river amateurs but we had a blast! The area is also a haven for fishing and hiking- we had a hard time leaving this beautiful place.

The town of Futaleufu 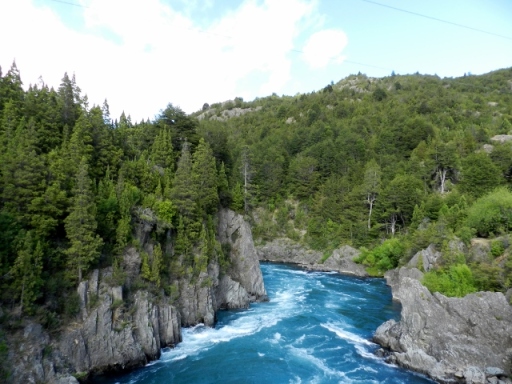 Fishing for rainbow trout in the Futaleufu River

Futaleufu is only fifteen minutes from the border of Argentina so we wandered across to explore a little of the Argentinian lakes district while we waited for some traveling friends to catch up with us.

The first things we noticed about Argentina was the delicious food and the cheap gas. After scarfing down some freshly baked pastries and filling up our tank, we headed out to Parque Nacional Los Alerces. No hiking here because it rained for days but Aron caught his first sizeable Patagonian trout! 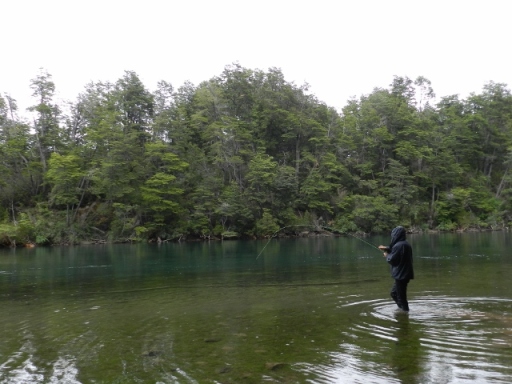 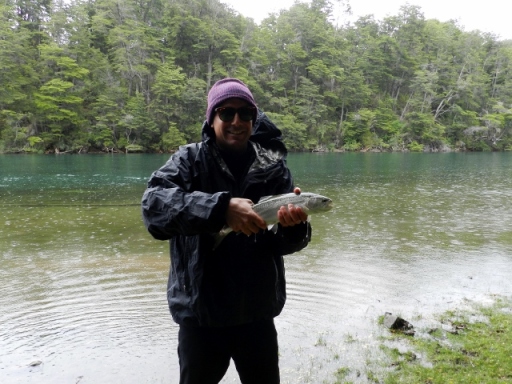 For New Years we camped in the cool, hippy town of El Bolson backed by a jagged toothy ridge of mountains. We grilled pizza over a fire (our holiday specialty) and shared our first Fernet with some new Argentinian friends. Fernet is a liquor similar to Jaegermeister, made of herbs and spices including rhubarb, camomile, cardamom, and saffron and is very popular in Argentina- we jumped right on board. 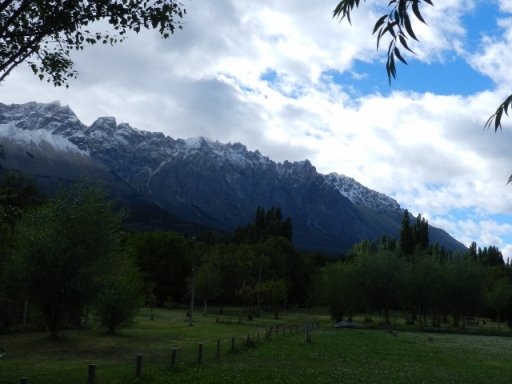 Early morning at a mirador over El Bolson

The feria – market – in El Bolson was a treat, just like the market back in Ocean Beach, San Diego that I miss so much. Freshly made jams with raspberries from the surrounding mountains, cool wood carvings, homemade cakes and cheeses, and delicious food- I was in heaven. We wandered around sipping local brewed beer and enjoying the live music. 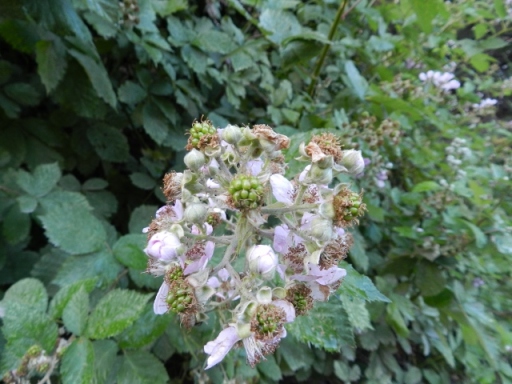 We mosied on up the Ruta 40, Argentina’s famous highway that runs from north to south through the entire country passing desert, pines, and pampa. We camped alongside beautiful lakes and did some hiking in Parque Nacional Nahuel Huapi, Argentina’s oldest Nacional Park. The hike up to Refugio Lopez, a mountain refuge, passed through dense forest home to comical woodpeckers and revealed gorgeous views of the lake below.

In the southern section of the park we visited Mount Tronador, a snowy beast that got its name from the thundering of ice chunks falling down its slopes. Instead of heading up into the snow we hung out along the rivers where Aron fished for trout and I figured out how to bake bread on our camp stove (success!). 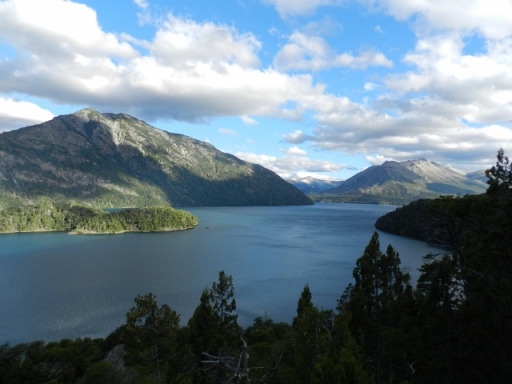 While I was baking in the van Aron ran up with a rainbow trout in his hands that he had wrestled out of the river. A little lemon and garlic and voila- dinner is served! 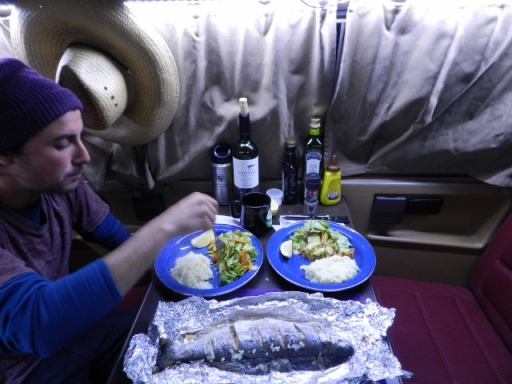 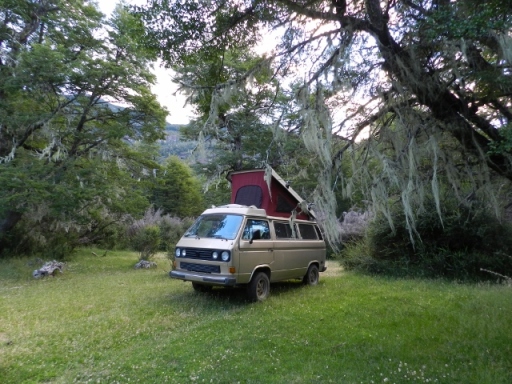 Chile and Argentina have turned out to be some of the best countries for traveling in the van. The landscape is breathtakingly beautiful, there are campgrounds and places to wild camp everywhere, and good vibes abound. We can’t even remember the last time we stayed in a hostel. Our little house on wheels is all we need when the outside is this gorgeous!

3 thoughts on “The Carretera Austral”